The most valuable player is the one who makes the most players valuable.

The Hula Bowl was established in 1946 as the Hula Bowl All-Star Football Classic game. When the inaugural game was played on January 5, 1947, the teams were composed of mainland college players versus a local Hawaiian Islands team; primarily made up of graduates of Leilehua High School in Wahiawa, Hawaii. The teams played a two-game series every January until 1951. It was then, that the format was changed to allow NFL Players to join the Hawaiian All-Stars in an effort to create a more competitive game.

Starting in 1960, the Hula Bowl game was established as an All-Star game that would only invite NCAA college players from schools across the US. The teams were divided into two teams, one team from those colleges located in the Eastern and Western United States. The teams were then split into “Aina and Kai " teams, the Hawaiian words for Land and Water.

Throughout its tenure, the game was historically played at the Aloha Stadium in Honolulu, Hawaii. In 1998, the mayor of Maui County requested that the Organizers of the Hula have the game moved to the Island of Maui. Beginning that year, the game was held at the War Memorial Stadium in the town of Kahului.

In 2006, the Hula Bowl was returned back to its historic home on the beautiful island of Oahu. The game remained on Oahu until the 2008 game.

There has been overwhelming support to bring the game to Florida at the UCF FBC Mortgage Stadium in 2022. The community has extended a gracious and warm welcome as the organizers have been planning the games return again in January 2023.

We are truly pleased to be having our 77th annual Hula Bowl in January! We hope that you will join us this year for our 2023 Hula Bowl in Florida! 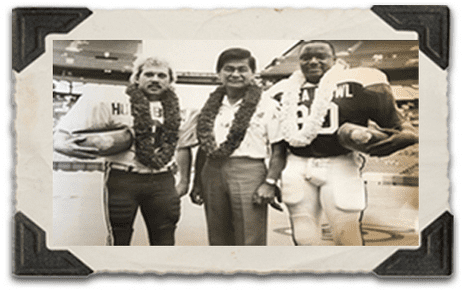